Yautja, also known as Predators, are an alien warrior race who appear in the Predator film series. They also appear as anti-heroes in the Aliens vs. Predator franchise.

Yautja are bipedal humanoids, physically distinguishable from humans by their greater height, long, hair-like appendages on their heads (nicknamed dreadlocks), their armor, their technology such as bio-masks, wrist gauntlets, plasmacasters, cloaking devices, self-destruct devices, wrist blades and other weapons, their reptilian skin, mesh wire body nets under their armor, and their faces which feature arthropod-like mandibles. Throughout the films, they all appear as various sizes, shapes and skin.

In the first film Predator, an individual Yautja known as the Jungle Hunter is defeated when Dutch crushes it by dropping a log on it in which then the Predator commits suicide by detonating his self-destruct device. In the second film Predator 2, another Yautja known as the City Hunter is killed when Mike Harrigan used the Predator's own disc to slice open its owner. In the third film Predators, an individual, identical to the Jungle Hunter, is killed by getting decapitated by the Berserker Predator following their duel. In the fourth film The Predator, a human/Yautja hybrid known as the Fugitive is killed by having his face smashed with a punch by the Upgraded Predator before having his head and spine ripped out and tossed aside. In Alien vs. Predator, two younger Yautja known as Celtic and Chopper are killed by a Xenomorph in an ancient pyramid while another one, Scar, is killed by a Xenomorph Queen. In Aliens vs. Predator: Requiem, a veteran Yautja, Wolf, is killed when the town of Gunnison, Colorado is destroyed by a nuke while he is battling a Predalien. 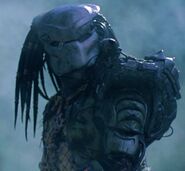 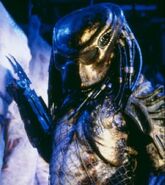 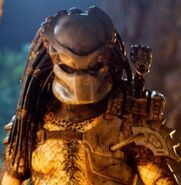 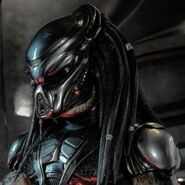 2018
Community content is available under CC-BY-SA unless otherwise noted.
Advertisement