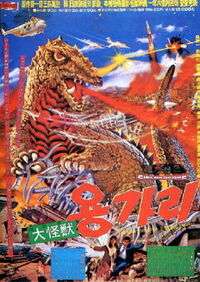 Yongary is the main antagonist of the 1967 South Korean-Japanese kaiju film Yongary: Monster from the Deep.

A massive bomb explosion in the Middle East awakens a prehistoric reptilian creature, which proceeds to stomp across South Korea in search of food.

Yongary is a brown dinosaur-like creature with a single rhinoceros-like horn on the tip of its snout, glowing yellow eyes, and several rows of dark brown scutes running down its back.

Yongary is killed after being drenched with ammonia, one of its only weaknesses.