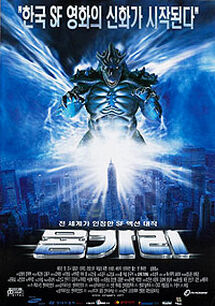 Yonggary is the main antagonist-turned protagonist of the 1999/2001 South Korean-American kaiju film Yonggary or Reptilian (depending on where you live).

Based on the 2001 version. The 1999 version has never seen release on any home media market.

Hostile aliens resurrect a dinosaur being dug up by American archeologists in South Korea, they then send it to multiple cities under their control to cause damage and shrug off helicopters, jets, and virtually anything the military has to throw at it.

Yonggary (Reptilian) is a brown/blue dinosaur-like creature with a single small horn on the tip of its snout, brown eyes, a tri-horn crown, and several rows of scutes running down its back.