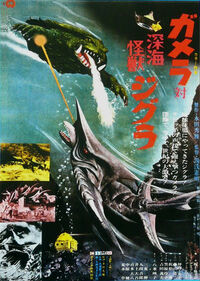 Zigra is the main antagonist of the 1970 Japanese kaiju film Gamera vs. Zigra.

Hailing from a planet where people are consumed en masse by sentient fish, Zigra ventured to Earth to capture and enslave humans.

Zigra is a creature resembling a silver goblin shark. It has very angular shapes making up its form, with an arrow-shaped head, a protruding jaw with numerous sharp teeth, orange eyes, large wing-like fins, and sharp spines running down its back.

Zigra is killed after Gamera sets him on fire. 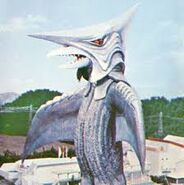 Add a photo to this gallery
Retrieved from "https://movie-monster.fandom.com/wiki/Zigra?oldid=1749"
Community content is available under CC-BY-SA unless otherwise noted.