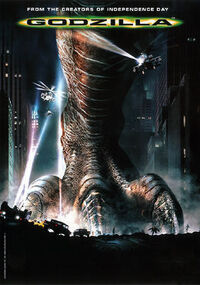 When nuclear tests near the French Polynesian islands mutate a marine iguana, the resulting gigantic creature migrates to New York City in order to build a nest.

Zilla is a large reptilian creature with a posture similar to that of a theropod dinosaur. It has navy blue scales on its back and a much lighter underbelly. Its head is very box-like with a thin upper jaw and a very large lower jaw with a large chin. Zilla has powerful forearms and a long tail held out behind it for balance. On its back are large triangular scutes, including two abnormally large ones on its shoulders. 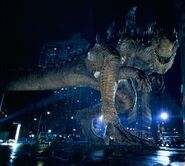 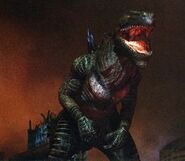 2004
Community content is available under CC-BY-SA unless otherwise noted.
Advertisement