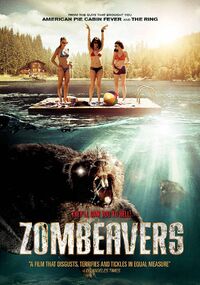 The Zombeavers are the main antagonists of the 2014 American comedy-horror film Zombeavers.

A truck carrying canisters of toxic waste accidentally loses one, which rolls down a hill and splashes several beavers. This transforms them into mutated zombies capable of transforming bitten humans into werebeavers.

The Zombeavers are nearly identical to normal beavers, but they are diseased-looking and have cloudy eyes.

The Zombeavers possesses the following powers and abilities:

The beavers and werebeavers are all killed. However, a bee is seen drinking some of the toxic waste and returning to its hive in a zombified state.

Werebeavers
Add a photo to this gallery
Retrieved from "https://movie-monster.fandom.com/wiki/Zombeavers?oldid=1492"
Community content is available under CC-BY-SA unless otherwise noted.