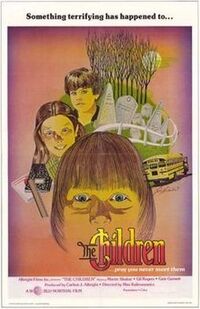 The Zombie Children are the main antagonists of the 1980 American horror film The Children.

A pressure leak at a nuclear power plant creates a strange yellow fog that mutates a group of children into destructive, bloodless zombies who kill anything they touch with microwave radiation.

The Zombie Children possess the following powers and abilities:

The children are all killed. However, when John's infant son is born, he notices that it has black fingernails.