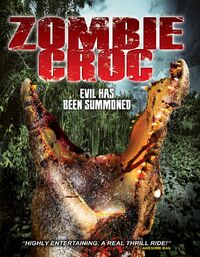 The Zombie Croc is the main antagonist of the 2016 American horror film Zombie Croc.

After he is evicted from his home, a voodoo shaman resurrects a 35-foot-long zombie crocodile from the grave in order to enact his revenge.

The Zombie Croc resembles a large dark green crocodile with yellowish teeth emerging from its lips and gums, as well as glowing milky eyes.

The Zombie Croc possesses the following powers and abilities:

The Zombie Croc is killed after it is shot in the heart.

Add a photo to this gallery
Retrieved from "https://movie-monster.fandom.com/wiki/Zombie_Croc?oldid=1501"
Community content is available under CC-BY-SA unless otherwise noted.