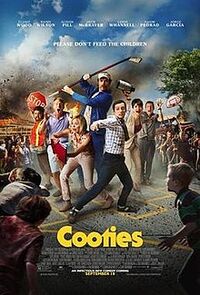 The Zombie Kids are the main antagonists of the 2014 comedy-horror film Cooties.

A girl named Shelley eats a tainted chicken nugget at school, turning her into a cannibalistic savage who proceeds to infect every child in the school.

The Zombie Kids resembles normal children of various ages and races, but they have crazed expressions and are covered with blood. Several are missing chunks of flesh.

The Zombie Kids possess the following powers and abilities:

The children are all killed after they are sprayed with gasoline and set on fire.