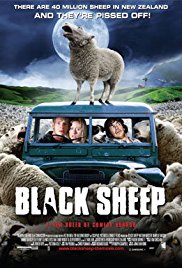 The Zombie Sheep are the main antagonists of the 2006 New Zealand comedy-horror film Black Sheep.

Angus Oldfield, son of a sheep farmer, has genetically engineered a new breed of sheep to maximize meat potential. When a mutant lamb fetus is stolen by animal rights activists and let loose, it proceeds to infect the rest of the flock with a virus that turns them into vicious killers capable of transforming bitten humans into hulking were-sheep.

The Zombie Sheep are nearly identical to normal domesticated sheep.

The Were-sheep are large hulking humanoids with hunched back, white woolly fur, and hooves for hands and feet.

The Zombie Sheep possess the following powers and abilities:

The sheep are killed after they are corralled and then blown up by igniting their flatulence. The film ends with the family sheepdog emitting sheep noises, implying that it has been infected.

Weresheep
Add a photo to this gallery
Retrieved from "https://movie-monster.fandom.com/wiki/Zombie_Sheep?oldid=1498"
Community content is available under CC-BY-SA unless otherwise noted.